My name, my motto, my forever reminder of the wisdom that sustains me, even in the worst of times. 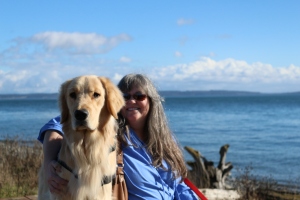 Mr. Biggs and Me

After a nine month wait, my service dog is finally here!  At only 18 months, I still must continue his training, but he is already doing the jobs he is supposed to do.  Having serious PTSD from multiple traumas, I opted for the benefits of a trained dog, rather than a puppy. It has been a decision that I will never regret. It was love at first site, and my worries that he would not take to me were abolished when he put his head on my shoulder, as I drove away from the airport, with he and his amazing trainer, Patricia.  She looked at me with surprise and pride and probably a mixture of difficult emotions, when he snuggled his head next to mine, and licked my wrist, ever so delicately.  Having raised him from birth to be a service dog, she has been there from the moment of his birth.  A purely selfless endeavor. Their bond will never die, but he seems to just know who he was meant for.  His ability to sense my needs is remarkable.  I cried in public, which I “don’t do”, the first time he did what is called blocking.  I was with the trainer, who stayed for five days to show me what he can do and how to continue his training.  The clothing store employee was asking about him, and we were talking, when I realized he was standing sideways in front of me, with his body pressed gently against my legs.  I was blown away.  I had not allowed myself to believe this was really going to happen.  At this moment, it became real.  Patti was beaming with pride.  Many more moments have followed in the 8 days since.  An actual soak in the tub; walking the forest trail by my house that goes all the way to the beach for the very first time, despite the fact that I’ve been here 2 1/2 years;  sleeping through the night; waking from a flashback/nightmare to a silky soft furperson pawing at you and sitting for a hug….. didn’t even turn on the light.   There is a peace in my every cell, and in my soul is growing.

Stepping into the light

The light and the dark
They play games in my mind
What’s dark is light, what’s light is dark
The world is chaos and I am blind

Too long has fear ruled my mind
You’ve brought me hope
With those eyes, so kind
Together, a pact, we did bind

To breathing, to joy
To nature and grounding
To the toys you’ll destroy
To the blond hair mounding

No more dark nights
They can’t quell your light
We will, together, set our sights
On a future, ever so bright